I have previously written about how to run OCR (Optical Character Recognition) on a PDF using Hazel and… a complicated pile of Python scripts and other software. Since I wrote that post, several of those pieces of software have been updated, and the core component has been, apparently, entirely abandoned.
Recently, while I was waiting for yet another keyboard replacement on my MacBook, I took another look at the OCR thing and found that there’s a much easier way available: OCRmyPDF.
It’s easy to install, assuming you’ve already got brew: brew install ocrmypdf
From there, it’s just a single action in Hazel. “Run embedded shell script: ocrmypdf $1”
Admittedly, you can use some of their many settings to get something a bit nicer than just OCR; personally, I’m using --rotate-pages --deskew --mask-barcodes – the first two to help with variations in the input because I sometimes use a bed scanner, and the latter to help Tesseract, which can have issues with barcodes..
I’ve also paired it with a couple additional actions, just to keep everything organized: 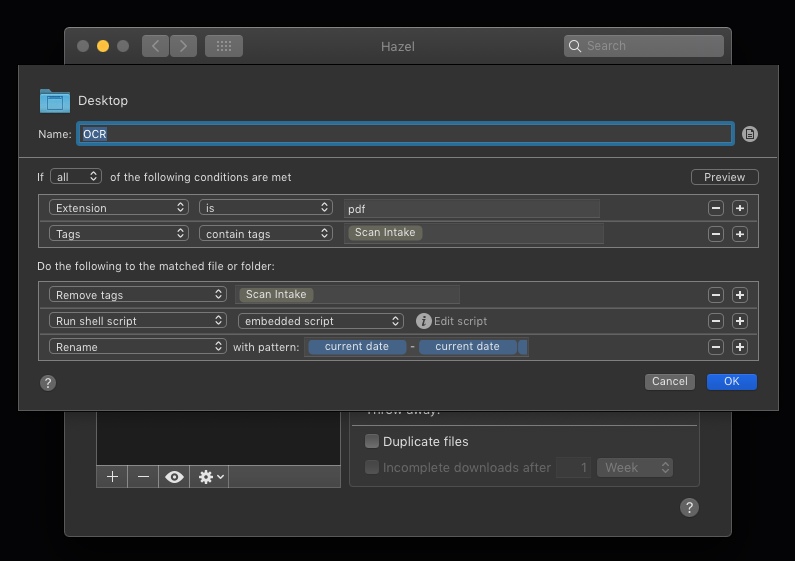 I also took the time to stop using Dropbox as the go-between for my scanner and the Mac running Hazel; I’d forgotten that the scanner has a USB port. Plug in a cheap flash drive, and it’s available as a (very slow) file server. Mount the drive, add it as a Login Item so it’ll auto-mount on boot, and you can set Hazel automations to run right there. I’m not OCRing them there, though — like I said, it’s a very slow server, so it tags them ‘for OCR’ and moves them to my desktop.1

11 replies on “Automatic OCR with Hazel: The Easy Way”

I’ve tested your solution but somehow your script does not work. It returns a “shell script exited with a non successful error”. Do you know why? I have macOS Catalina.

Thank you very much for your help!

Hi, thanks for this guide.

I’ve set this rule up but am running into errors the i have no idea how to trouble shoot.

Do you have any suggestions?
Thanks,

I used the ocrmypdf from the command line and the issue is that you need to specify both an input filename and an output filename:

The error states that it is missing a required argument. When I read through the instructions I was surprised that only a single argument was given.

On ocrmypdf the same source file was completed in just over 9 minutes. It gave warnings about some pages but it kept going. Half of the time was spent running the OCR on the individual page images. Processor meters and the fans showed that the resources were being fully utilized (as it would on HandBrake). The other half was rebuilding the output PDF. That process used a single thread and processor core. Still, there was a significant time savings on this file so I will keep it in my toolbox.

Isn’t it amazing that Adobe, who gets so much from so many users for the subscription to its programs cannot make a multi-threaded program in the past decade when those machines have become ubiquitous. Yet, a free program can outperform it?

The problem seems to be that his code misses two things: the output-file and ” ” around the $1. I got the script to work when looking like this (in the most basic form):

Thank you so much Grey. I’ve been googling for an OCR option and finally stumbled onto this post.

As James mentioned the script requires input.pdf output.pdf so I just added another `$1` to the script to work in Hazel:

Hey Bradley, would you mind posting your entire script? I get the same execute error as previous commenters experienced when writing `ocrmypdf $1 $1`. Thanks!

I am also running in the execute error. Would someone kindle post their entire shell script that resolves the issue James highlighted?

I too was having the same problem, and finally got it to work.

The trick though was the quotation marks. Regardless if I typed it in or copied pasted from a browser it resulted in “File not found”

The work around was I put Hazel in debug mode:
1) In the menu, select “Hazel→Preferences”
2) Hold down the option key.
3) You should see a new pane called “Debug”. Select it. You can release the option key.
4)Click the “Enable Debug Mode” checkbox.

On my screen the ocrmypdf part is white; ” ” are red; and $1 is green if that helps too.

I presume the quotations in terminal might work as well? To see if it’s ocrmypdf or hazel causing the issue, I recommend in terminal typing
“ocrmypdf” a space and drag the file into terminal, once for the input and once more to use the same name as the output (or type a name “OCR.pdf”)

Hello everyone,
I have an odd problem, when I try to run the simple shell script: ocrmypdf “$f” “$f” Hazel returns an error ! Through the debug mode I forund that OCRmyPDF returned error 5: The user running OCRmyPDF does not have sufficient permissions to read the input file and write the output file. Funny thing is when I run OCRmyPDF from terminal it just OCR’s the file. Any ideas ?

Hello again, Found the mistake $f instead of $1, only spend hours going through this… The second pressed post, it dawned upon me.