It’s an interesting hike, in three sections – the woodsy bit at the bottom, the bouldering bit in the middle, and the ash fields at the top.

This last photo was from the bouldery bit, but you can see a wash of the ash fields extending down in the back there.

But now, dear reader, I must admit to you that I didn’t make it to the summit; I got as far as the ash fields and realized that, if I tried to continue on to the top, I’d wind up replacing my “I went on a cool hike!” story with an “I went on a ride in a Forestry Service rescue helicopter” story.

One day, I’ll be back. And hey, it was a cool hike! Anywhere with signage like this is going to be a cool hike.

I was in Coeur d’Alene a while back, and had the chance to go for a hike around Tubbs Hill. If you’re ever in the area, I recommend it – it’s a nice little hike, and there’s some great views along the way.

This weekend, I am attending a wedding and then moving; in place of my usual weekly words, please enjoy a couple photos I took at Silver Falls State Park.

A quick post of a class assignment we did a while back – tinkering with data visualization. I went with my travels and my playlists as the data sources.

Consider this a continuation of my previous post; same vacation, different day.

This was actually one of the last things we did while I was over there; a nice little walk in the woods. That picture doesn’t do it justice—the walk started in the “it’s not spring yet” portion, but as we made our way downhill, we started to see actual greenery.

We had pretty good luck with the weather—it was nice and sunny while we were at the top of the hill; the wind picked up a bit right as we were getting to the shore of the reservoir, just enough to give the trees some fun movement.

Reservoirs are a fun bit of infrastructure; for the most part, they don’t really look like infrastructure, right up until they really do.

There’s little pieces that are obviously man-made, sure, but for the most part, it’s easy enough to just let nature handle it.

And then there’s the unofficial pieces that people add.

And, despite the signs posted every fifty feet along the path on the way in, ‘this is our water supply, don’t swim in it, people drink this,’ there’s always a rope swing.

I recently had the opportunity to visit a friend of mine over in Connecticut. I’ve never been to New England before (the closest I’d been previously was an hour spent in a New York airport, and given that I can’t even remember which airport it was, it clearly wasn’t the most fun visit), and I was pretty excited to see the sights.

The first place we went that made me glad I’d brought my camera was Wickham Park; it’s up on more of a hill than I initially realized, which made for a good panorama at the top.

A bit lower down, there are a few different ‘gardens’ around the park; the first one we wandered around was the ‘marshland’ theme, if I’m remember correctly.

Honestly, I think the top and bottom of the hill were the best parts; the gardens in between were… not all that impressive.

The “Oriental Garden”, for example, featured a rather sad pagoda and a very slimy pond.

I also didn’t bother taking any pictures of the “Irish Garden,” which looked like what happens when someone in the 1930s makes a garden, and it becomes too ‘historic’ to tear down for being a racist caricature. An aesthetic that was rather undercut by the sign at the end, which says it opened in 2016.

The “Scottish Garden” was a bit more interesting in the statuary, but rather lacking in actual plant life.

When we visited, I read through the pamphlet a bit, but it mostly boiled down to a list of all the different gardens, a brief mention that it was named after the rich fellow who’d established the place, and the fact that it’s a private park, owned and maintained by Bank of America on behalf of the family’s estate. (“Everything around here is owned by some bank of another,” I was told.)

But hey, it’s sitting on some pretty land, and I do like seeing parks that’re at least somewhat open to the public, so who am I to complain?

Joshua Tree National Park has been on my ‘places to visit’ list for quite a while. Honestly, I’m not sure how it wound up there, but I’m happy it did – from what I saw, it’s a pretty cool place.

(I was told by a friend that you should really try to stay for the whole day, especially sunset, and just see what it all looks like with different lighting conditions, but unfortunately wasn’t able to do that this time; next time, though…)

The park was established in the 1930s by FDR. At the time, the Works Progress Administration – among other things – was running a poster campaign intended to inspire the American people, I believe along the lines of ‘look at all this neat stuff our country has!’

As far as I can tell, Joshua Tree didn’t get any of those posters, unfortunately; something about the federal government very busy all of a sudden.

A lot of the posters that were produced are lost now, more’s the pity. It was an interesting aesthetic, and I’m a big fan of the whole “advertising for the national parks” thing.

Apparently somebody else was as irritated by all this as I was, because there’s a modern imagining of what a WPA poster for Joshua Tree would’ve looked like; they’re for sale in the park’s information center.

Fun fact about the Joshua Tree: they don’t form rings in the way that other trees do; when scientists want to figure out how old one is, the preferred method is to measure the height, then divide by the species’ average growth rate.

The moral of the story here is that our national parks are a treasure, and we should continue to support them. (And expand them! Write to your congresspeople about it.)

After all, who doesn’t love a whole bunch of beautiful nature?

This past weekend, I finally got a chance to visit another of Oregon’s tourist destinations: Detroit Lake. It’s a pretty cool place — used to be a valley, and then, y’know, industry happened; two dams later, there’s a lake. Normally the water level is a bit higher, but (I’m told) there was a storm early in the season, for which the folks in charge of the dam1 drained some water so they wouldn’t have overflow problems. Unfortunately for them, the fish were spawning at the time, and wound up taking advantage of the raised river level, and per the “don’t kill thousands of fish” directive, they were then required to maintain that higher river level. So the reservoir drained faster than usual, and the season got cut off earlier than usual. Bit of a bummer for the local businesses.
Presented in no particular order, some of my favorite photos from the trip: 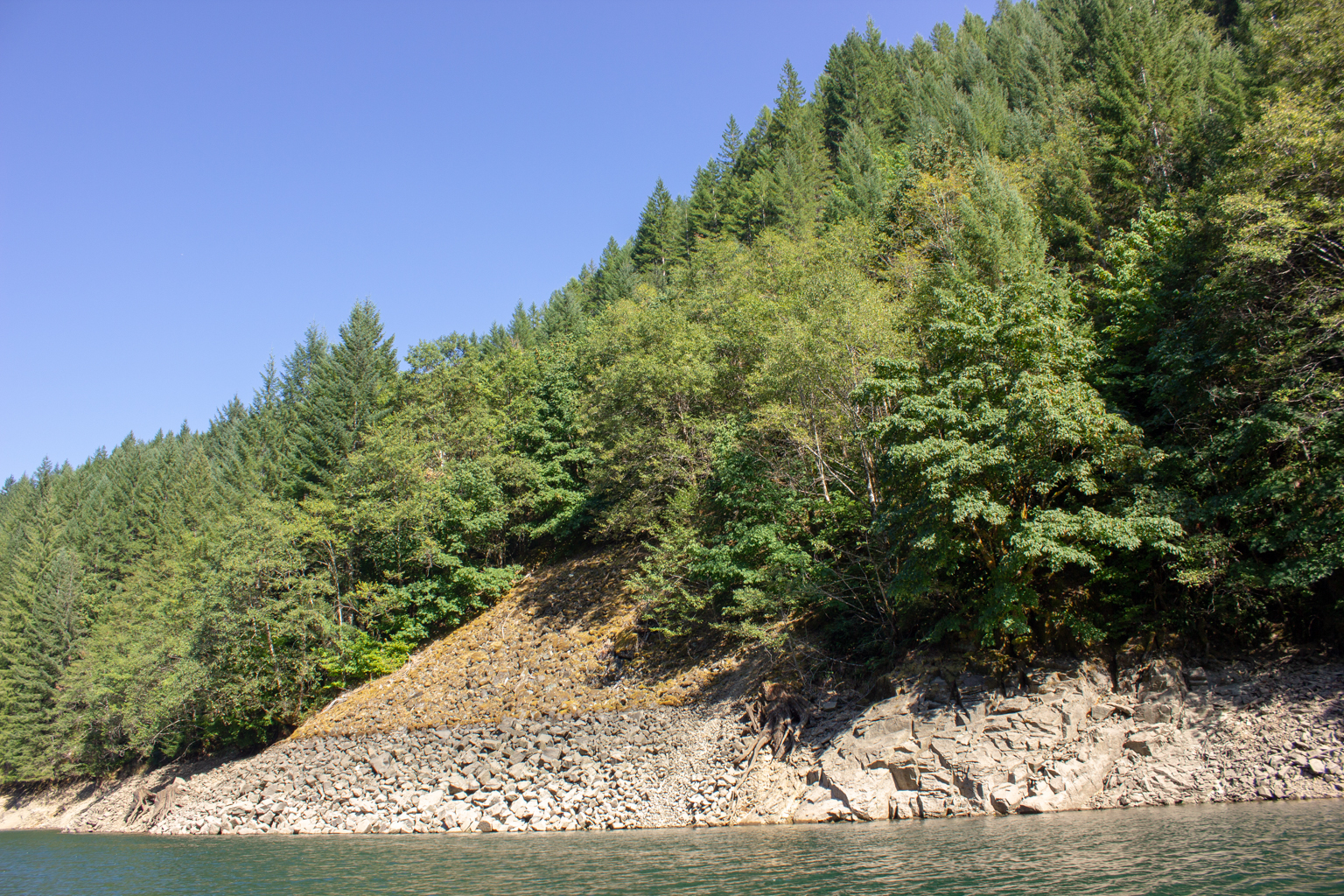 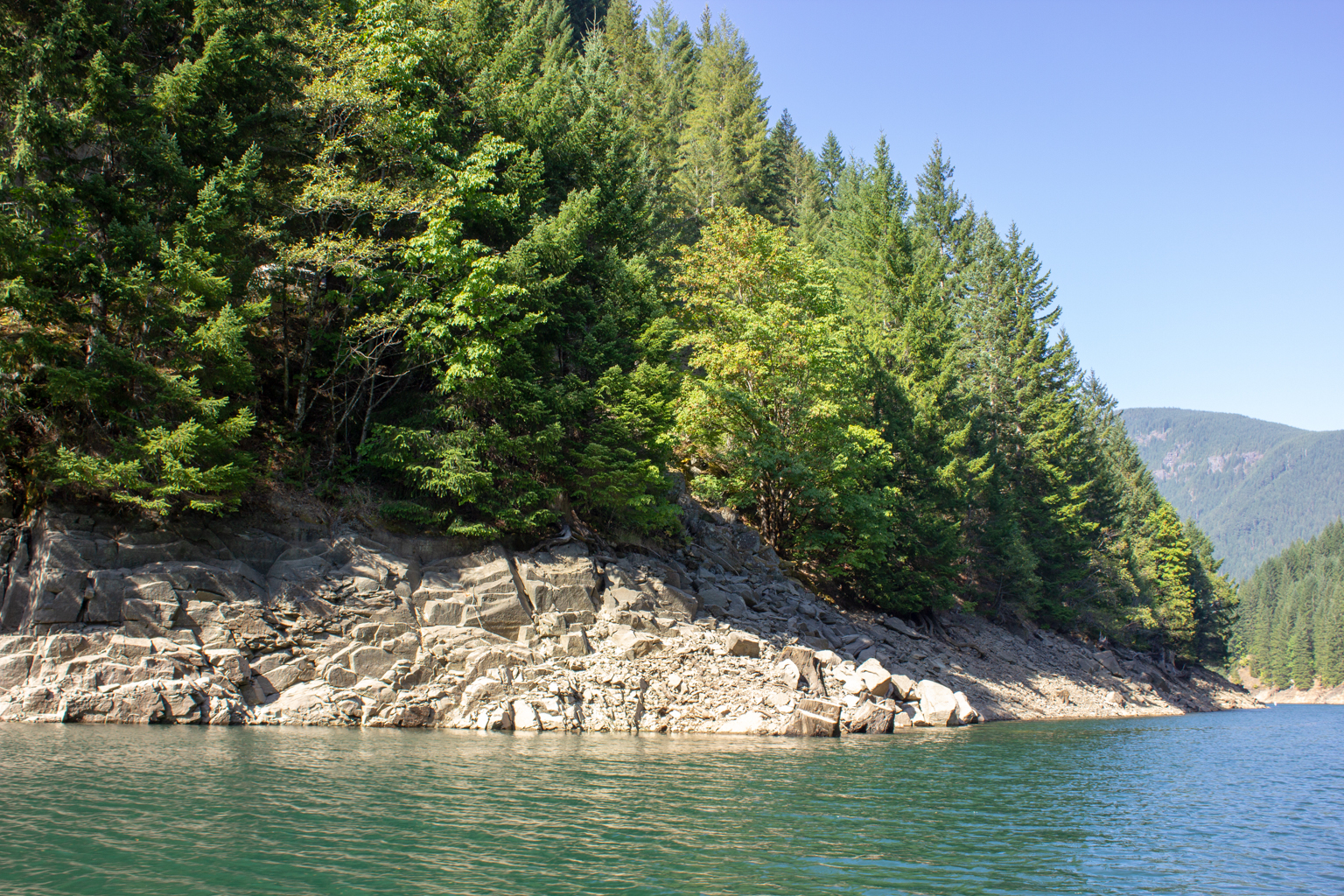 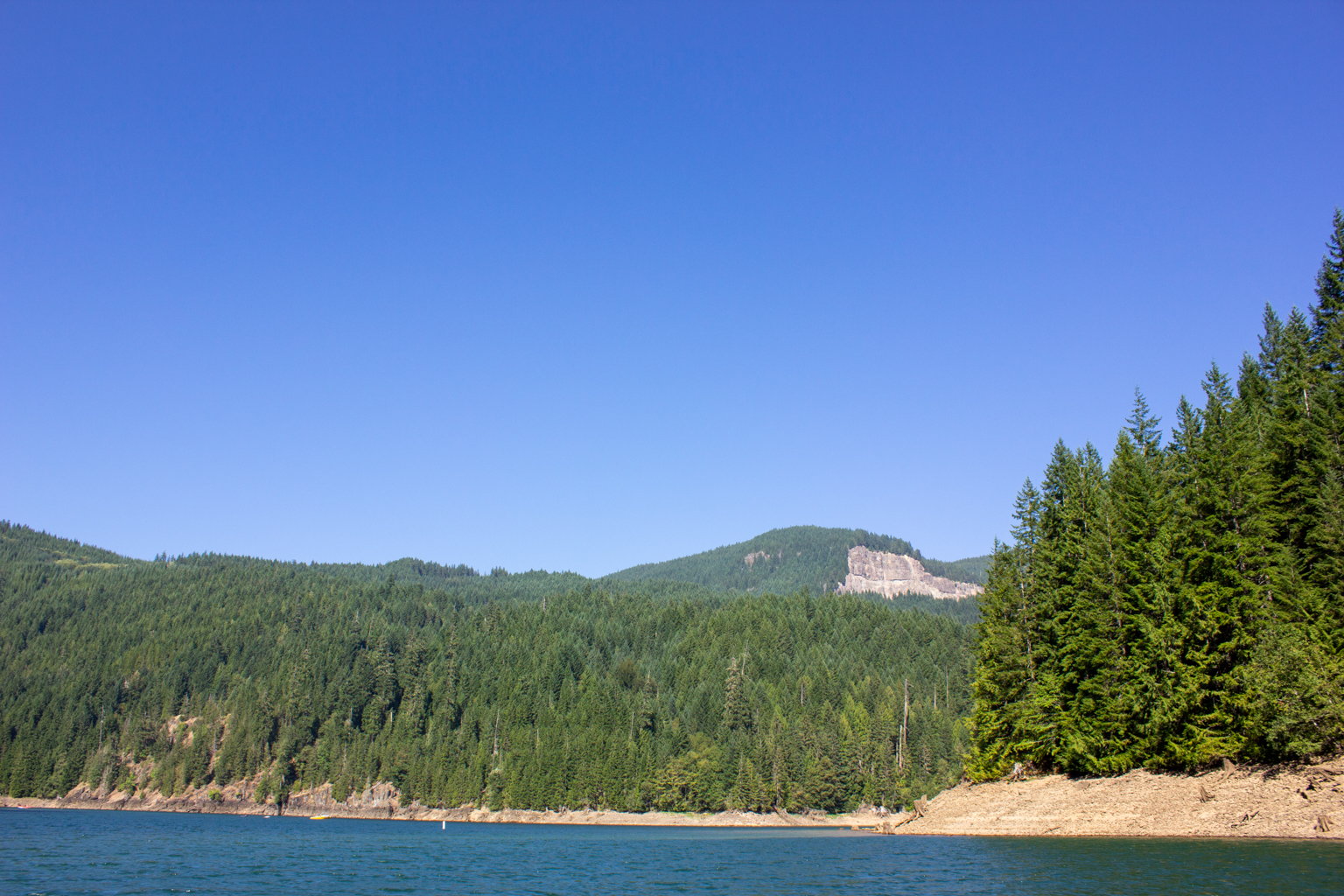 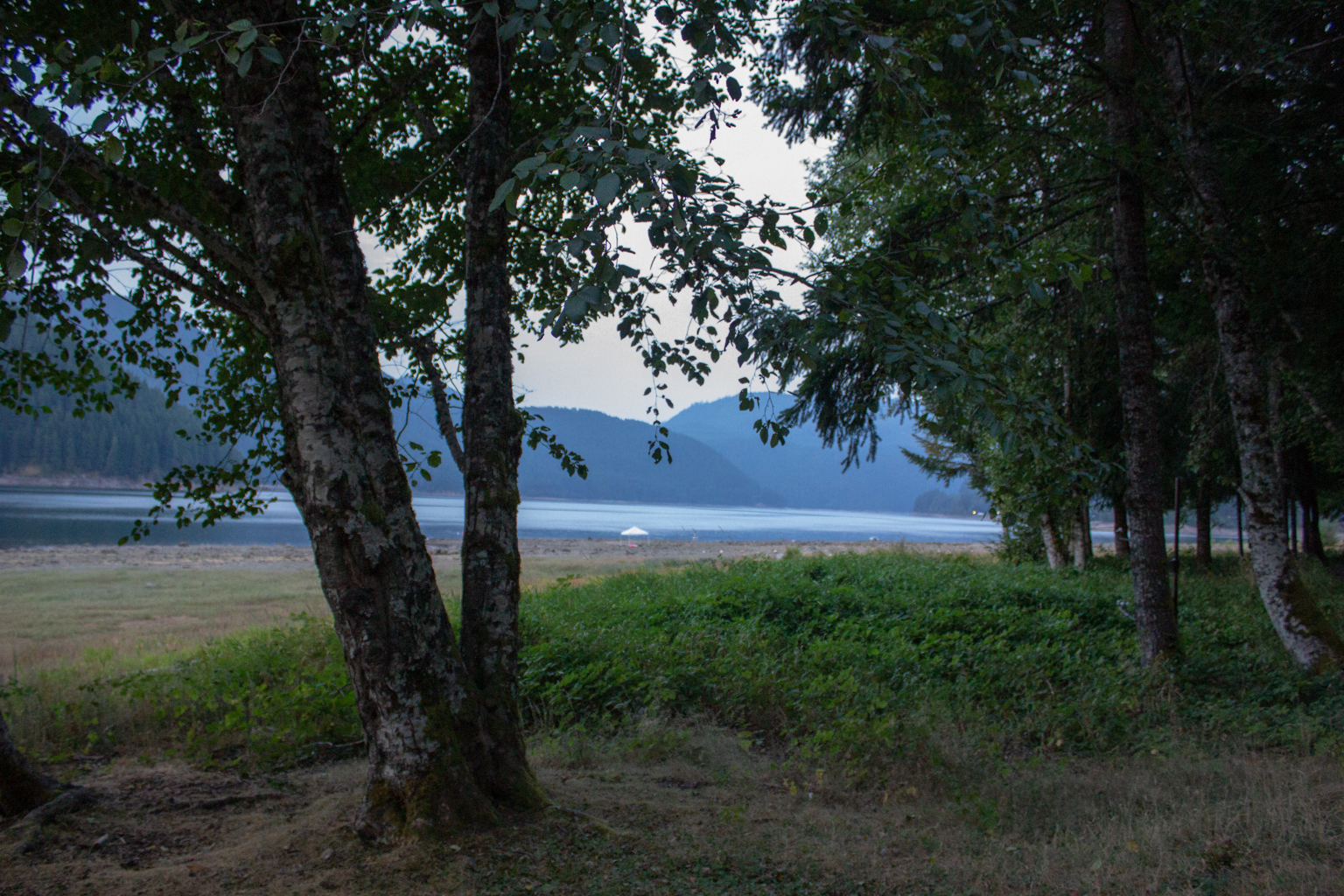 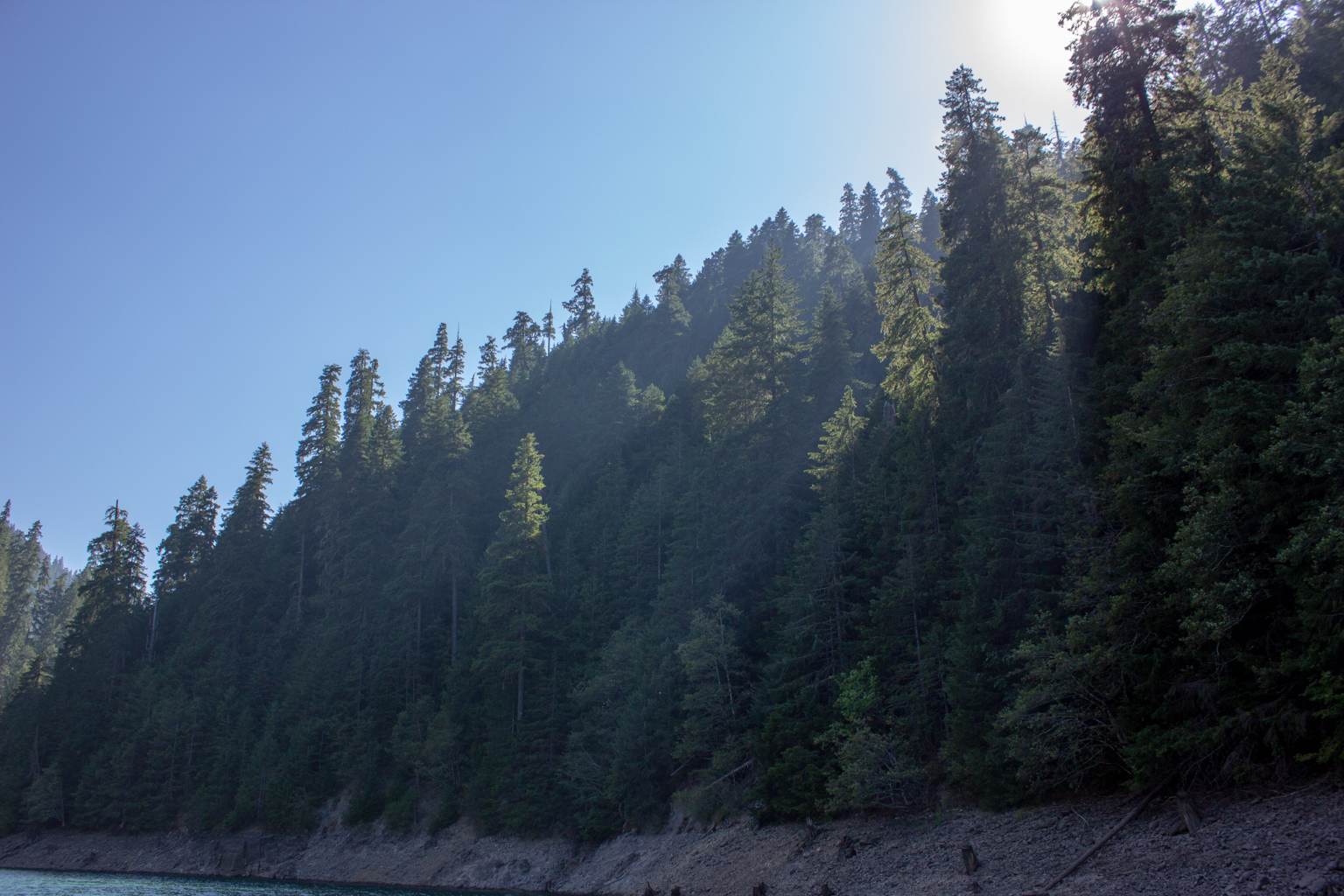 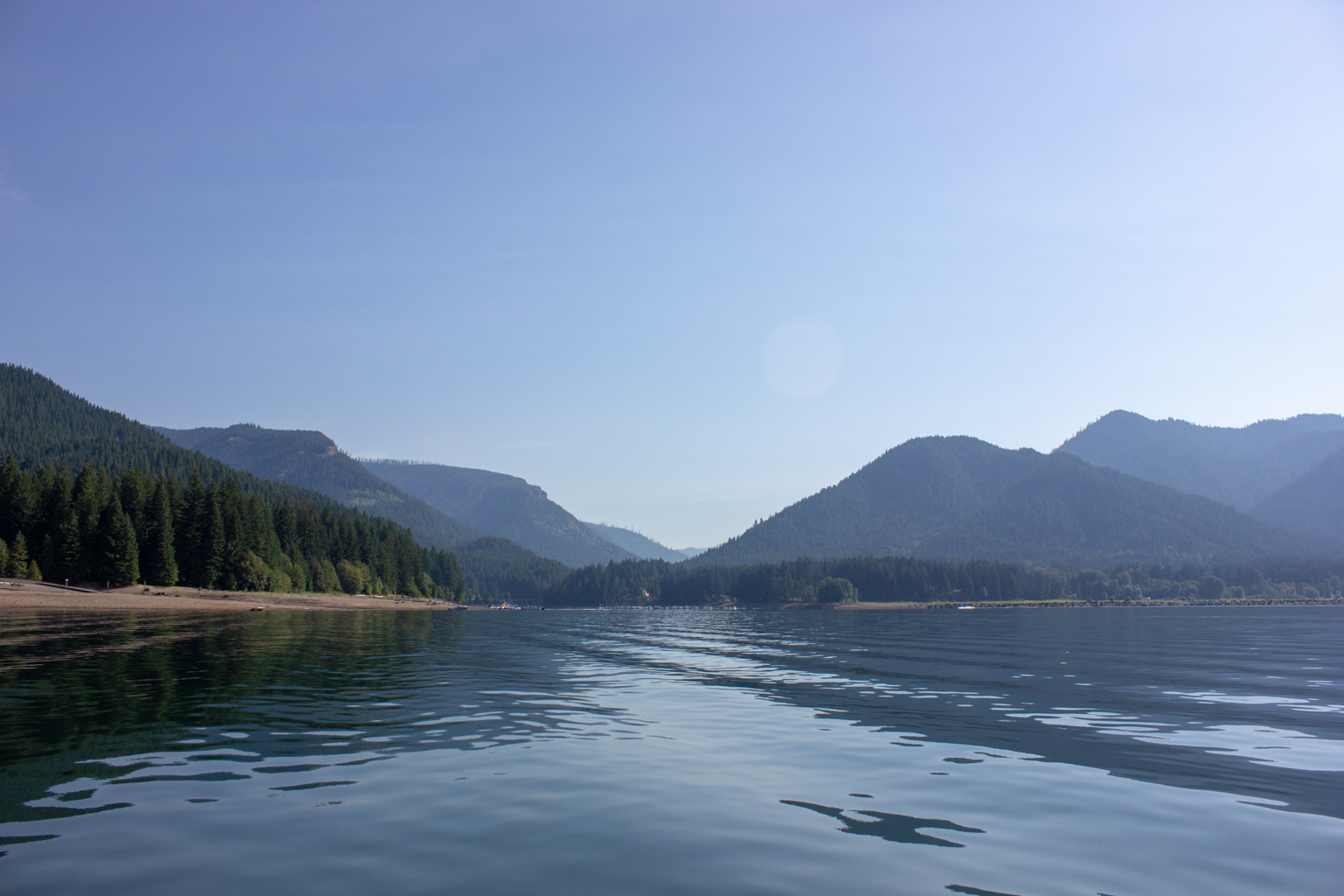 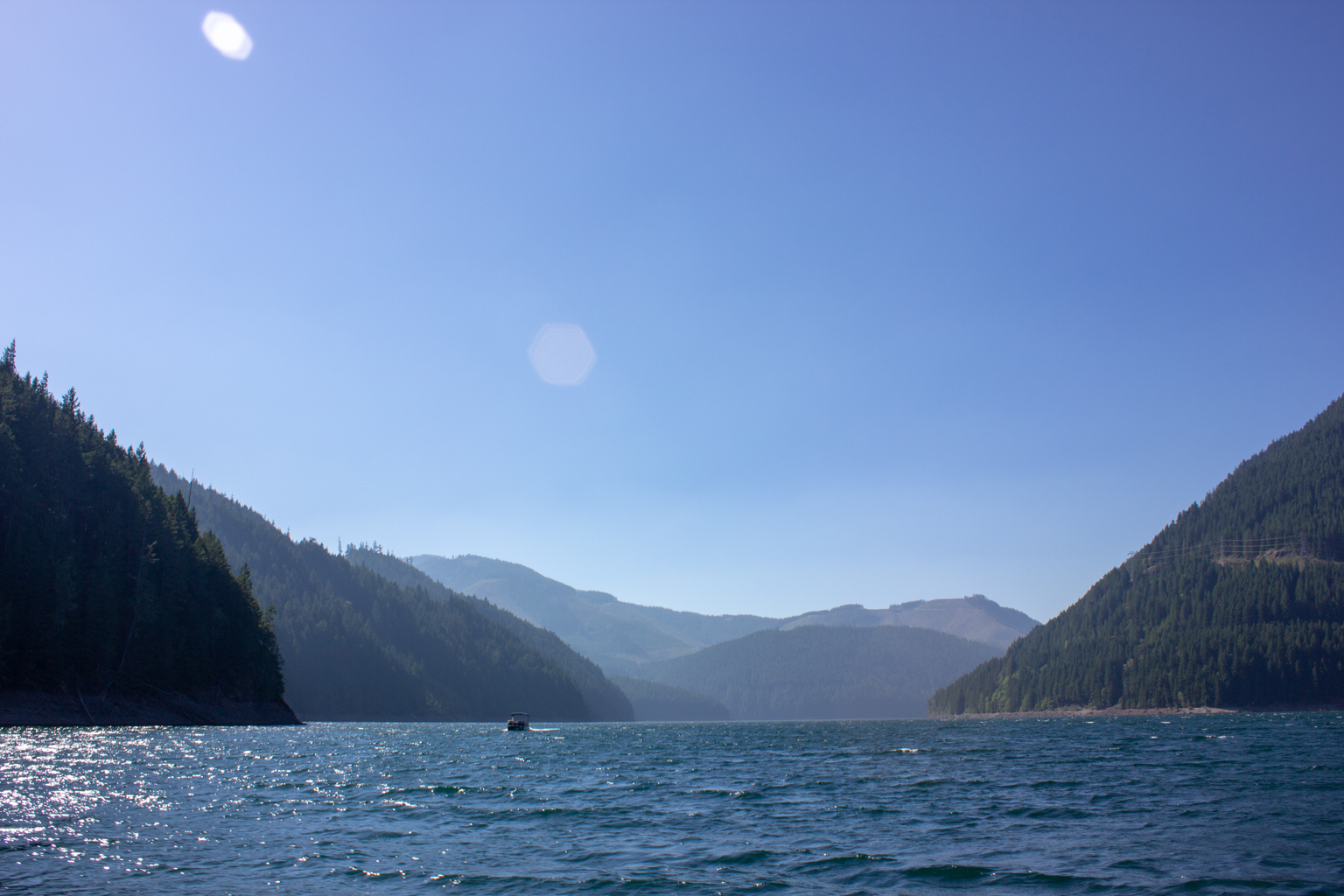 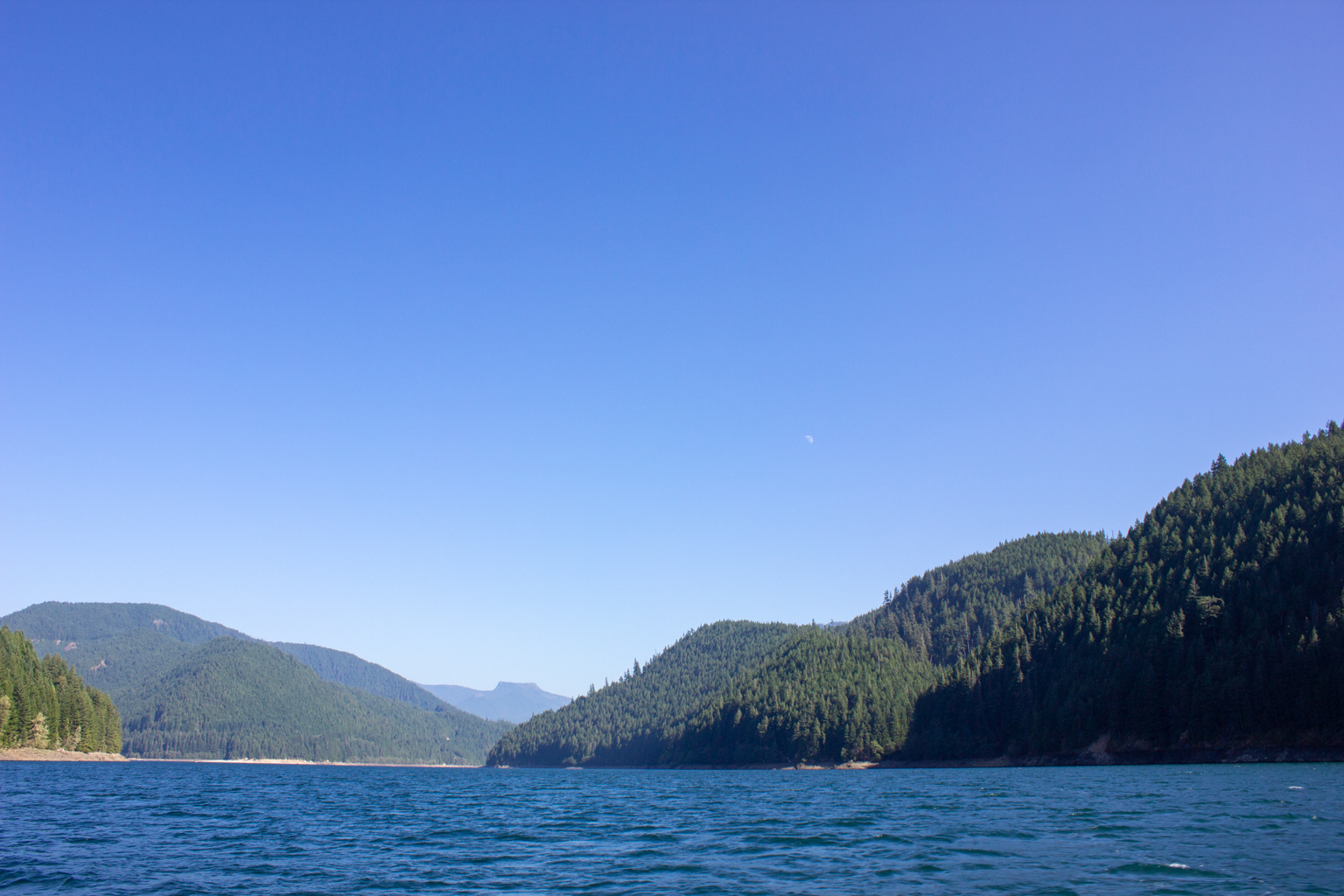 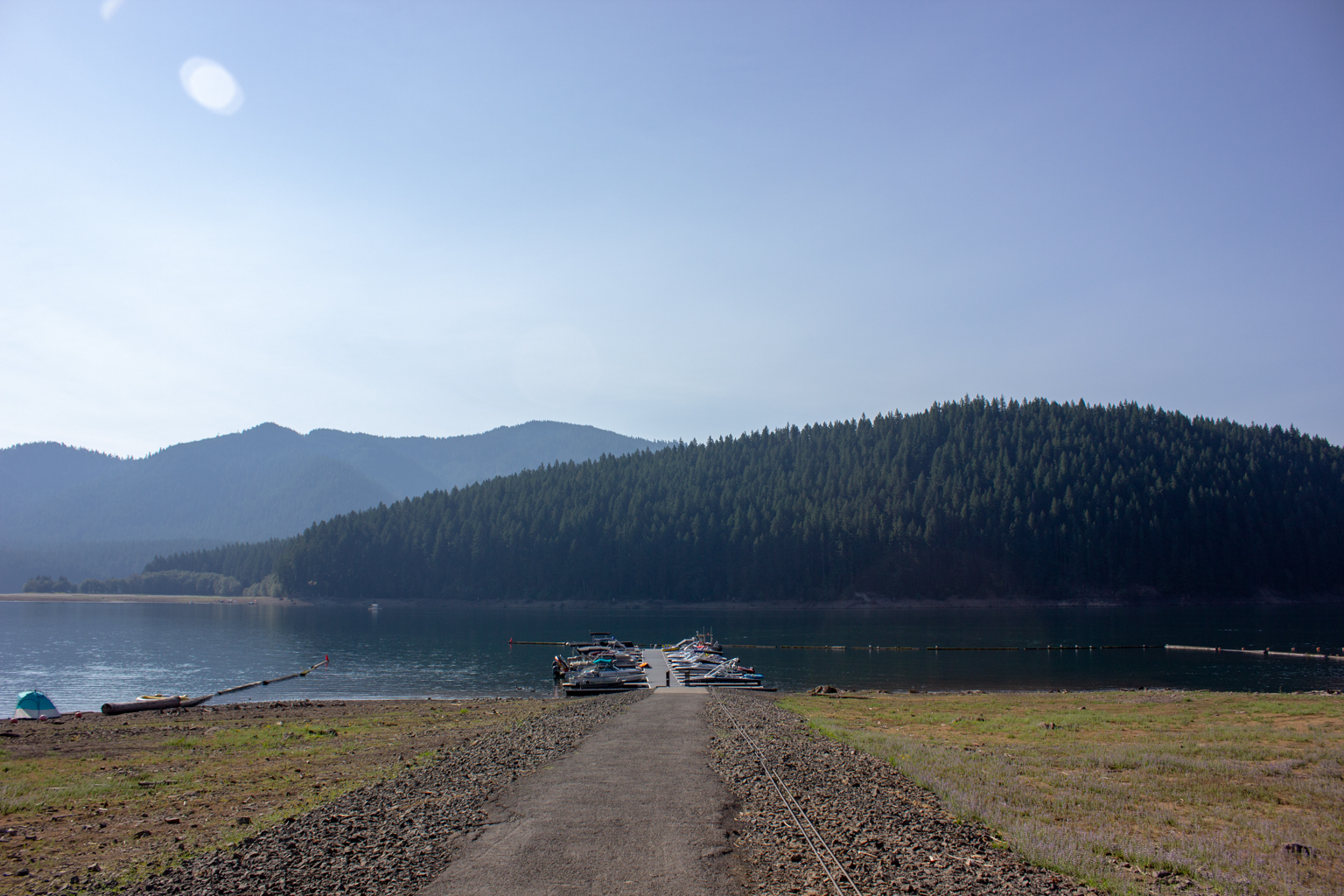 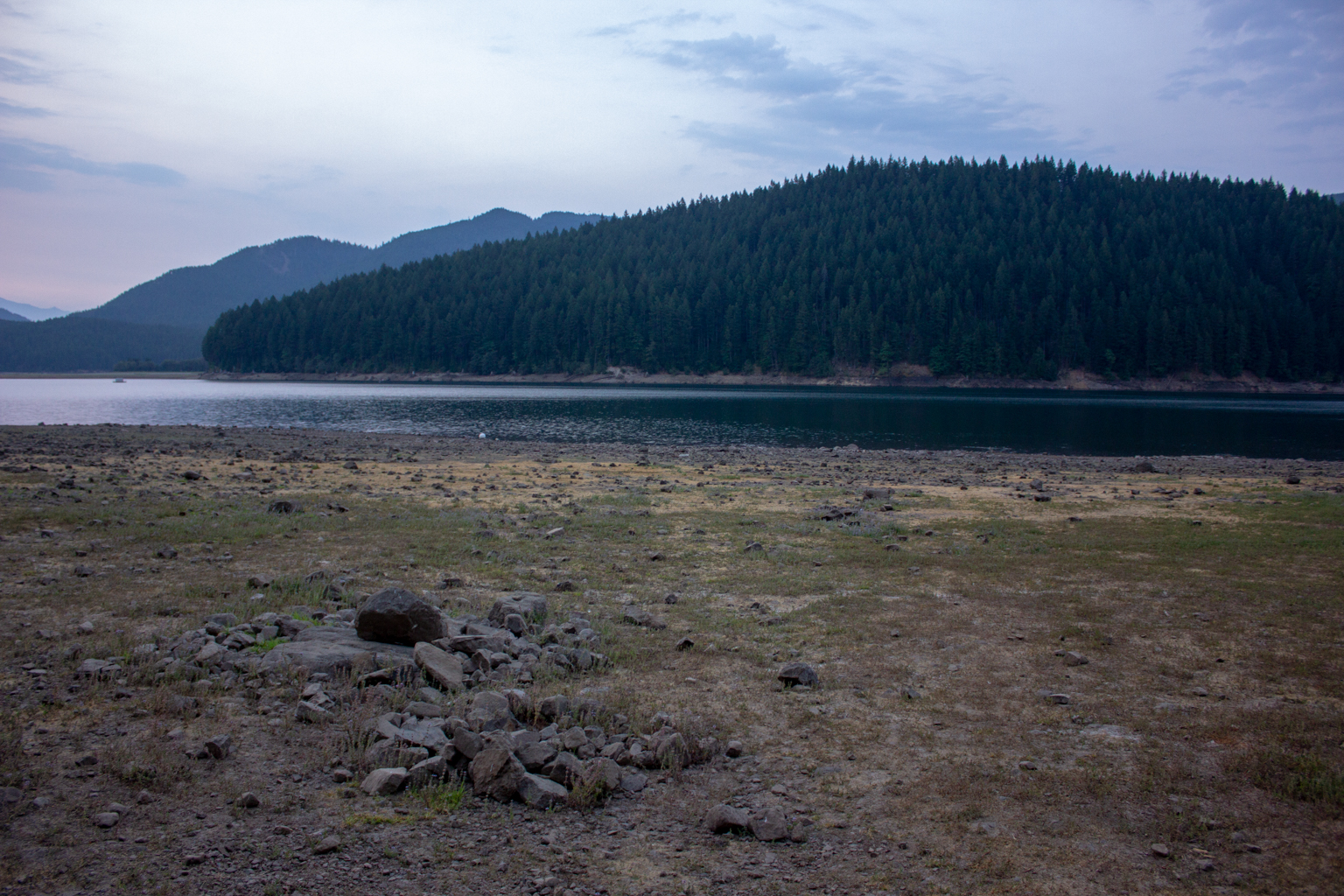 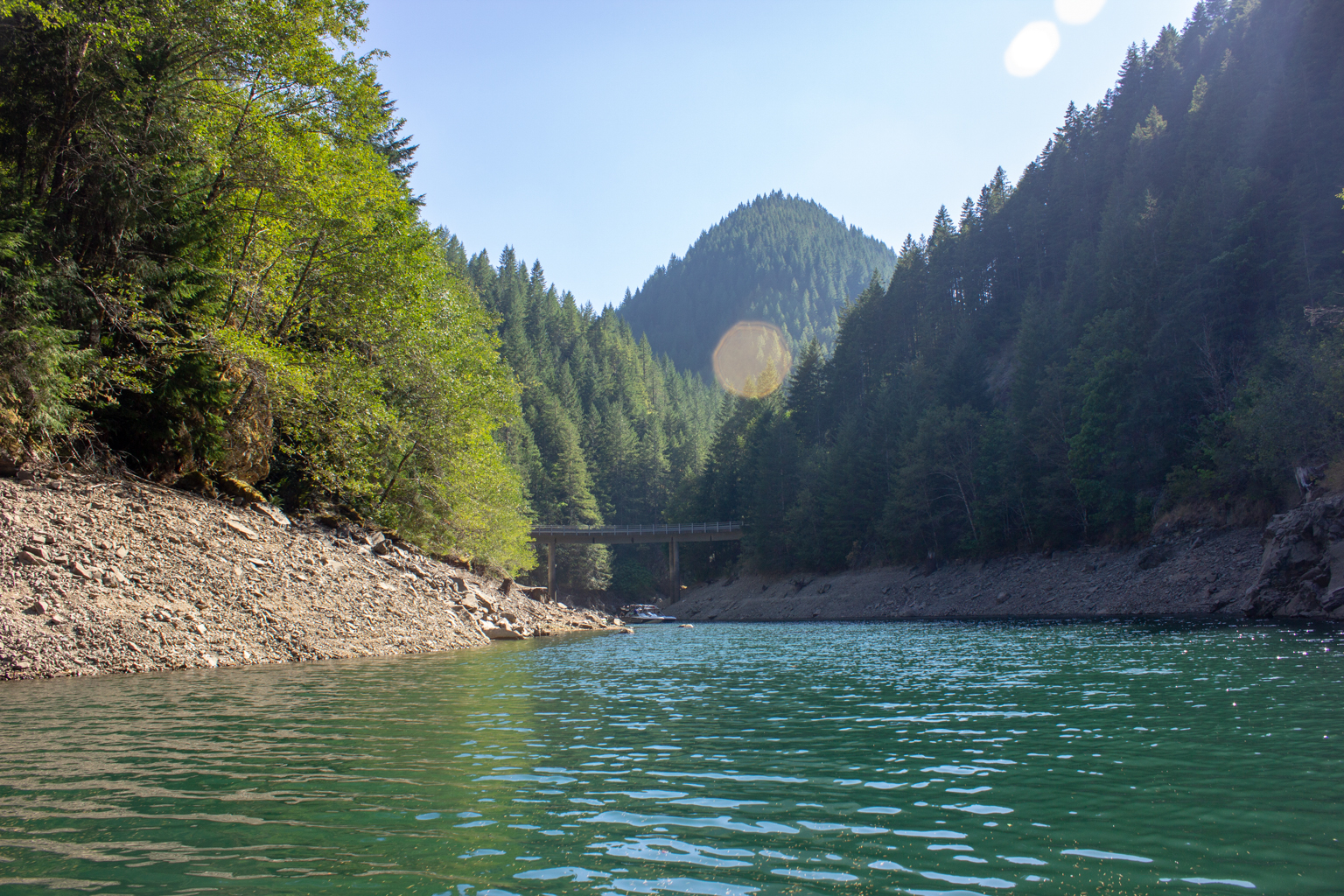 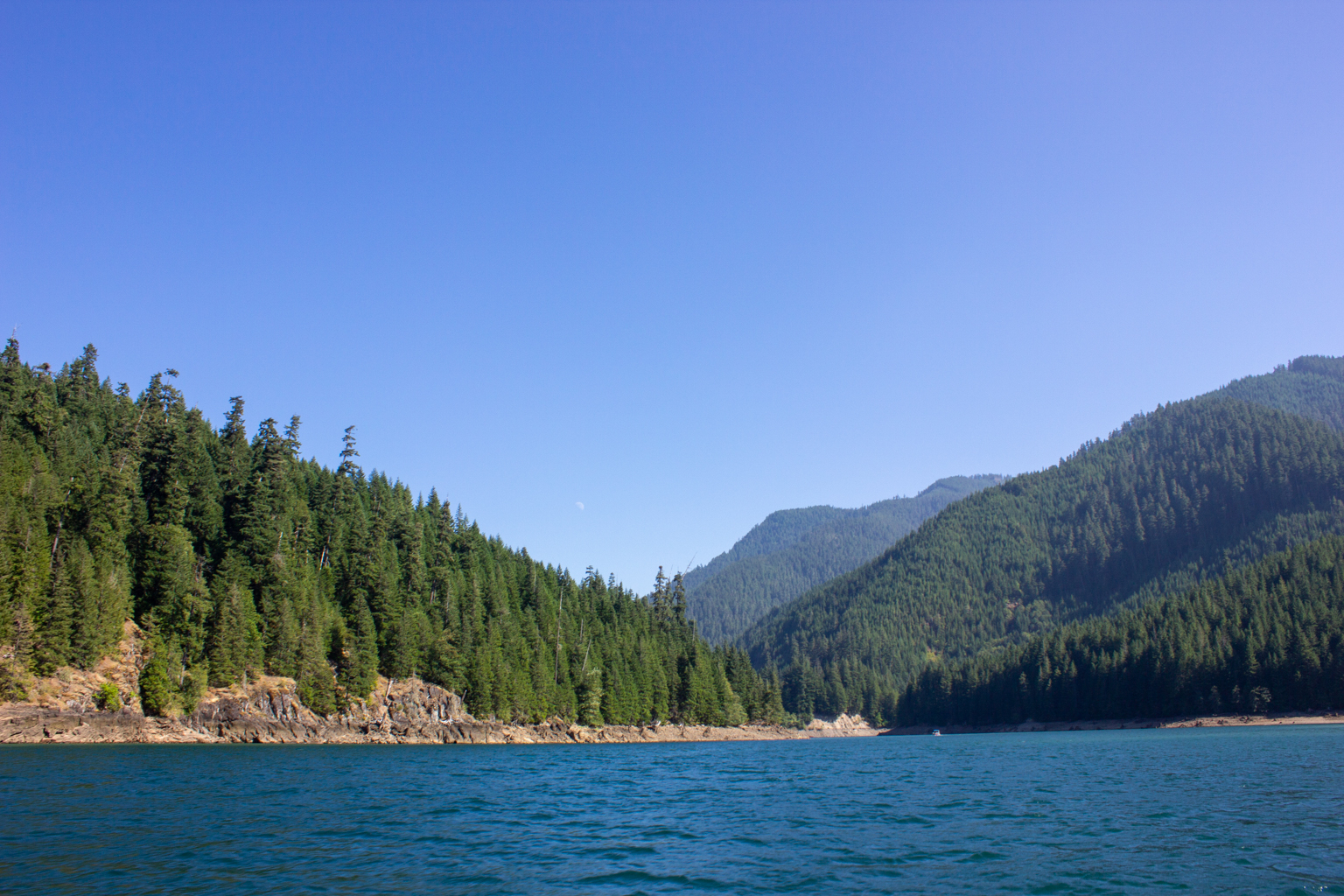 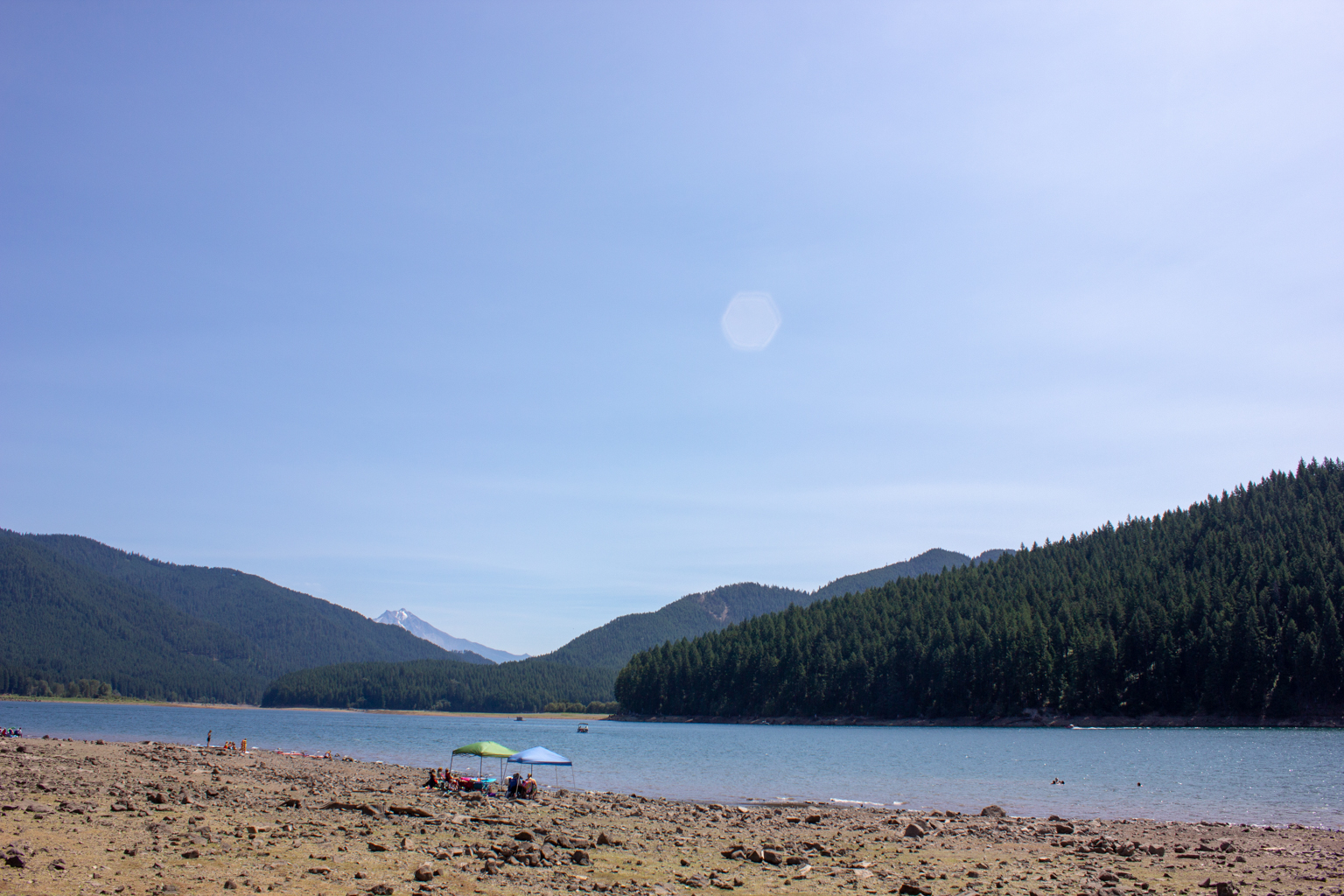 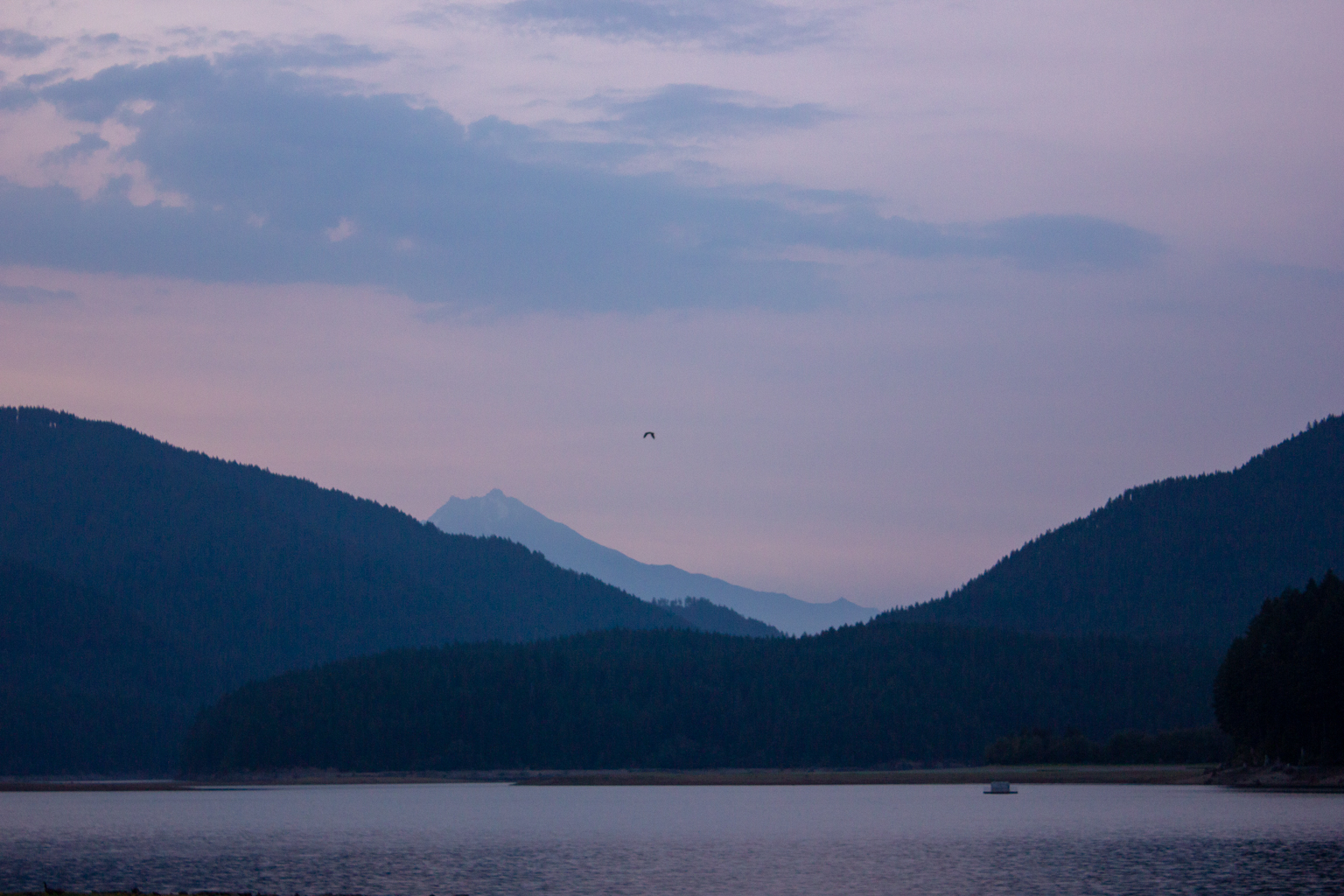 You may not have heard, but there was an eclipse recently. While I wasn’t going to go out and buy one of those expensive camera filters for doing proper eclipse photography, I did have an extra pair of eclipse glasses and some duct tape, so I made do. (The photo above is without the filter; during totality, which I was in the zone of, you can look at the event with the naked eye… or the naked lens.) 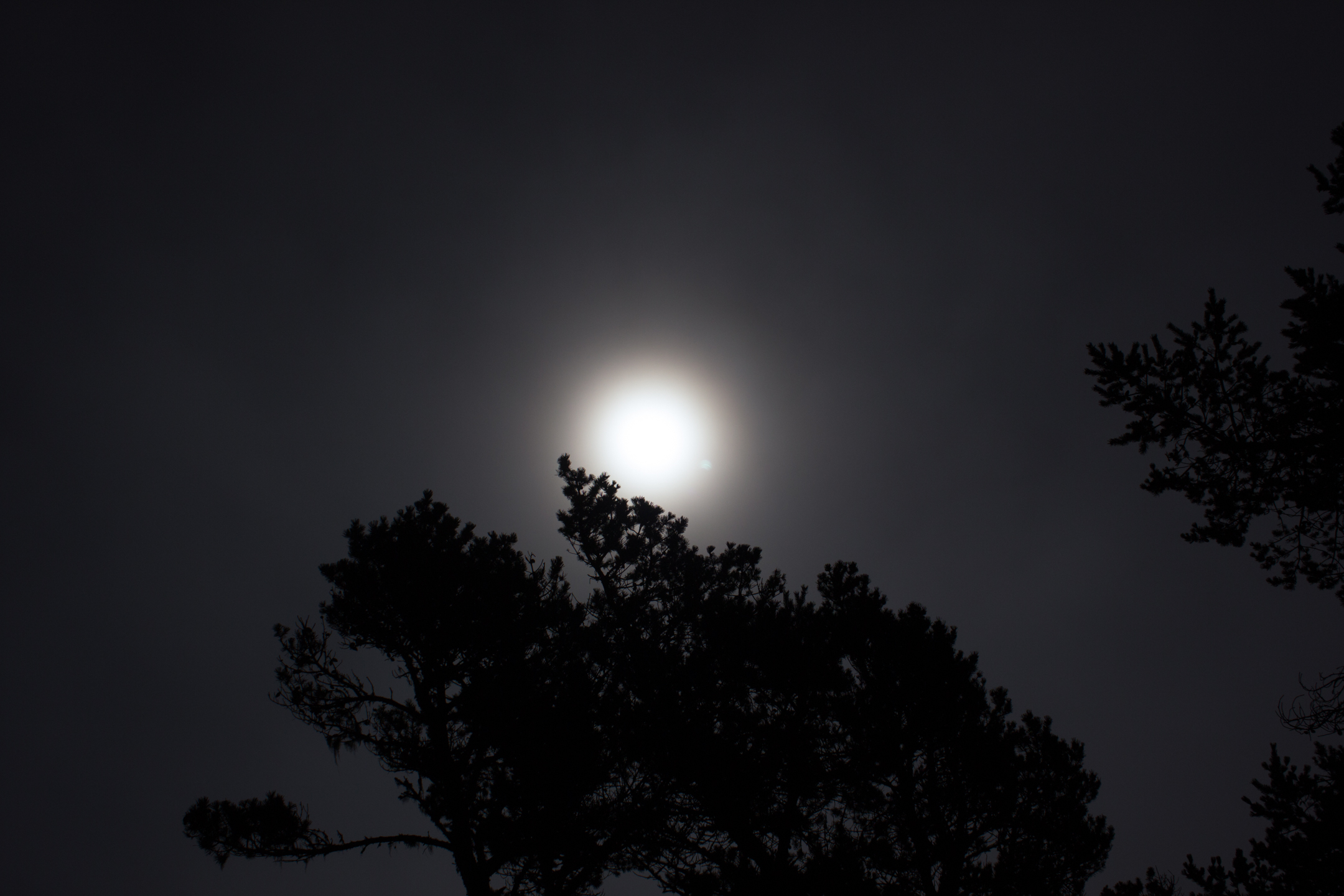 This is right before totality began – just a sliver of the sun was still showing, but without a filter, that’s still a lot of light. 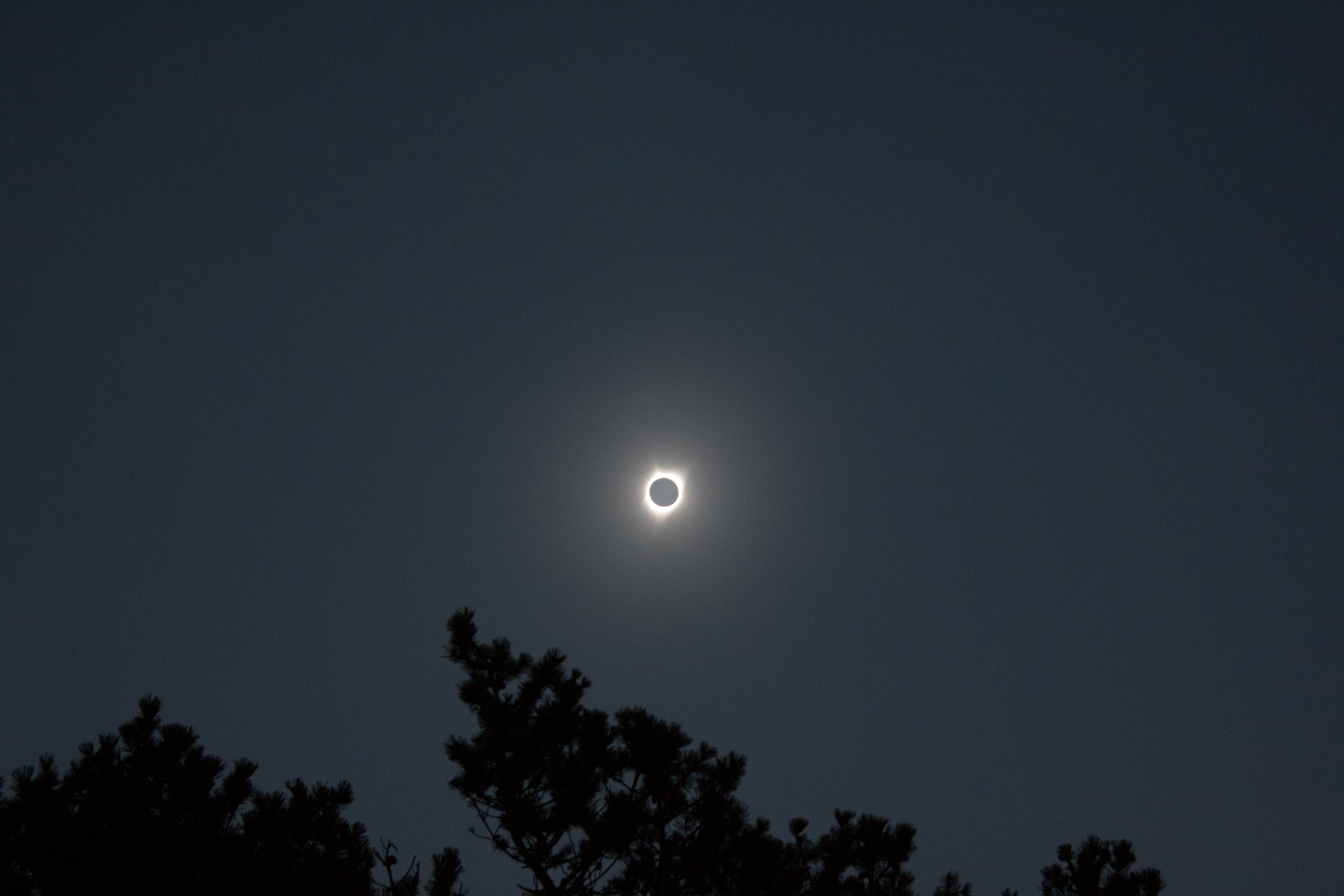 I was switching off lenses throughout – I had a prime lens with the makeshift filter attached, and a kit zoom that I used when I wanted no filter but didn’t want to deal with the duct tape. This is that kit zoom, no filter, at its maximum zoom level. 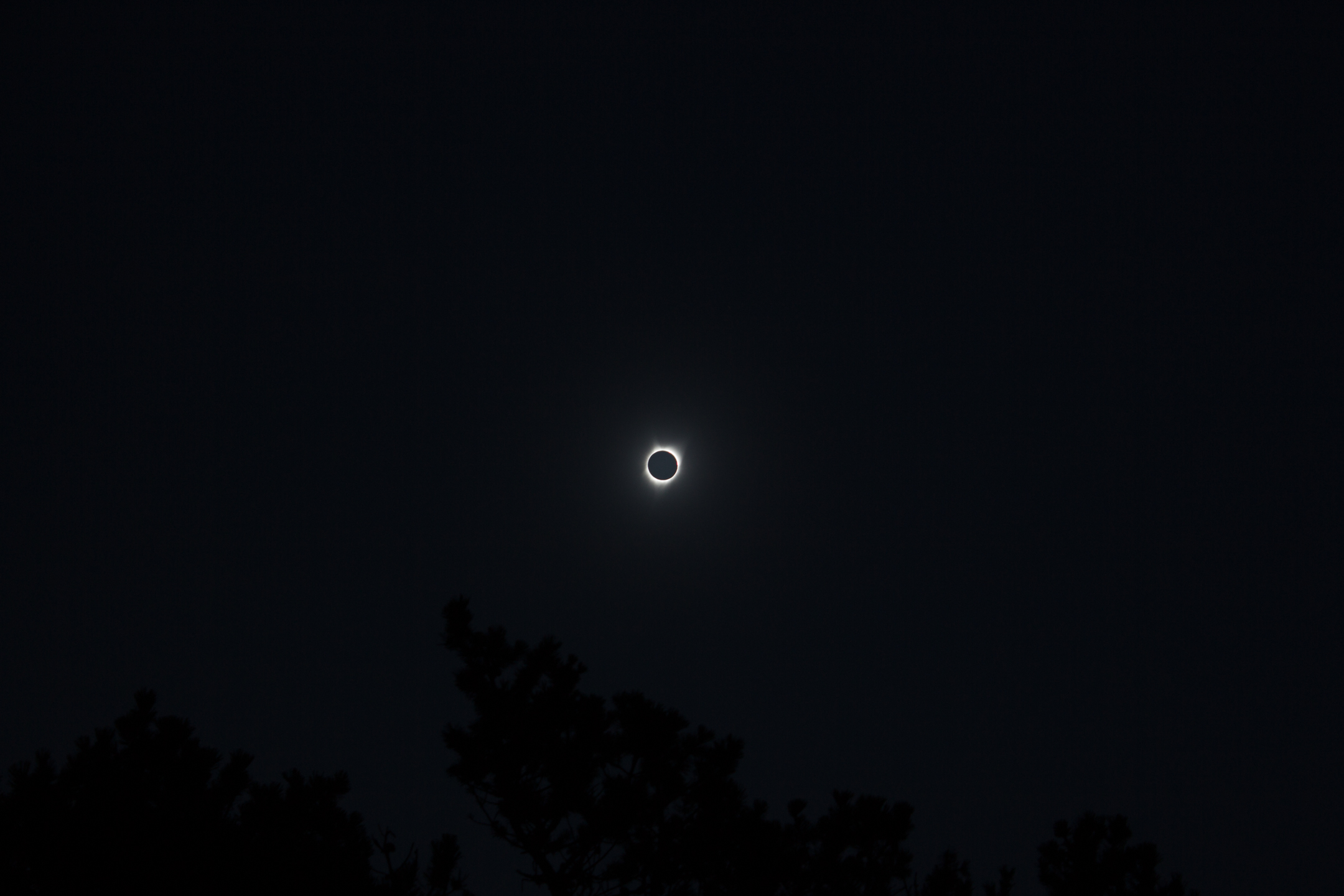 Finally, here’s what it looked like through the filter.
I’m not going to talk about it being a ‘life-changing experience’ or anything, but I will recommend checking out some of the recordings – I believe NASA put out a 3D livestream that I assume is archived somewhere, and lots of better photographers than I am got some good photos, I’m sure.
And hey, next time there’s going to be an eclipse in the US, go check it out.1

Technically speaking, this is part of Yaquina Head Outstanding Natural Area, but that’s a bit long of a name, and I rather like “Quarry Cove” better. I’m also quite happy to have had another opportunity to get my camera out.

END_OF_DOCUMENT_TOKEN_TO_BE_REPLACED

After an evening wandering around Venice, we hopped aboard our night train for Vienna.1 Once we got to the city, we had a free afternoon, so what did we do?

END_OF_DOCUMENT_TOKEN_TO_BE_REPLACED

After Barcelona, we got on a plane to Venice, the final stop on our tour of Europe.

END_OF_DOCUMENT_TOKEN_TO_BE_REPLACED

From Madrid, we made our way to the train station and hopped aboard the high-speed train to Barcelona, our next destination.

END_OF_DOCUMENT_TOKEN_TO_BE_REPLACED

Night trains are convenient in that you kinda just wake up in your destination, but not super great in that it’s still a horrendously uncomfortable way to sleep.1
But hey, it got us to Spain, so who am I to complain?

END_OF_DOCUMENT_TOKEN_TO_BE_REPLACED

Leaving Budapest, we went to the airport instead of the train station and, following a good deal of waiting,1 hopped aboard a plane for Portugal. We landed in Lisbon, figured out a bit of how the public transit network works, and then headed to our hotel to sleep off the jet-lag. I’m calling that ‘day zero.’